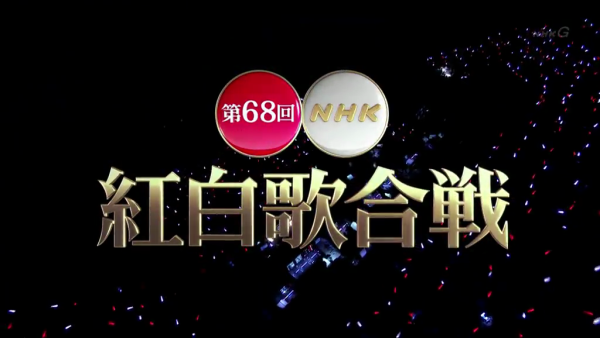 Details : NHK Kōhaku Uta Gassen (NHK紅白歌合戦 Enueichikei Kōhaku Uta Gassen), more commonly known as simply Kōhaku, which official translation is "Year-end Song Festival",[1] is an annual music show on New Year's Eve produced by Japanese public broadcaster NHKand broadcast on television and radio, nationally and internationally by the NHK network and by some overseas (mainly cable) broadcasters who buy the program. The show ends shortly before midnight. Before the show began broadcasting on television in late 1953, the show was held on 3 January and only consisted of a radio broadcast.

Literally "Red and White Song Battle", the program divides the most popular music artists of the year into competing teams of red and white. The "red" team or akagumi (赤組, 紅組) is composed of all female artists (or groups with female vocals), while the "white" team or shirogumi (白組) is all male (or groups with male vocals). The honor of performing on Kōhaku is strictly by invitation, so only the most successful singing acts in the Japanese entertainment industry can perform. In addition to the actual music performances, the costumes, hair-styles, makeup, dancing, and lighting are important. Even today, a performance on Kōhaku is said to be a big highlight in a singer's career because of the show's wide reach.

This year's hosts are Arimura Kasumi for the Red Team and Arashi's Ninomiya Kazunari for the White Team.

(Note : Few last videos that I'll be posting before I hand over the rein to the new mods. To those who have sent me an application, please watch out for another post anytime this day. Thank you for your support and Happy New Year to all of you <3)