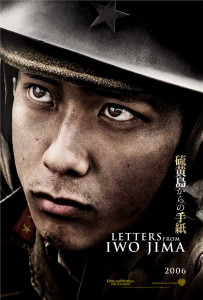 Letters from Iwo Jima (硫黄島からの手紙 Iōjima Kara no Tegami?) is a 2006 Japanese-American war film directed and co-produced by Clint Eastwood, starring Ken Watanabe and Kazunari Ninomiya. The film portrays the Battle of Iwo Jima from the perspective of the Japanese soldiers and is a companion piece to Eastwood's Flags of Our Fathers, which depicts the same battle from the American viewpoint; the two films were shot back to back. Letters from Iwo Jima is almost entirely in Japanese, although it was produced by American companies Warner Bros. Pictures, DreamWorks Pictures, Malpaso Productions, and Amblin Entertainment. After Flags of Our Fathers underperformed at the box office, DreamWorks swapped the United States distribution rights to Warner Bros., who had the international rights. MORE HERE